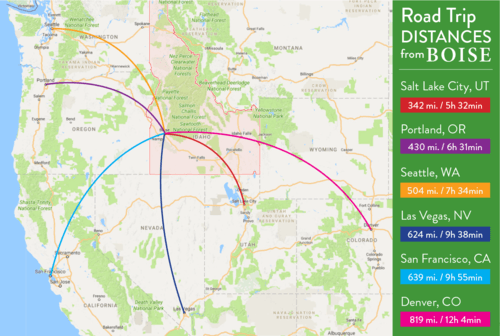 BOISE WAS LISTED #1 AS “GETTING IT RIGHT” IN A 2014 ISSUE OF TIME MAGAZINE’S, “SOLUTIONS FOR AMERICA” ARTICLE.

Boise is the capital and most populous city in the state of Idaho, as well as the county seat of Ada County. Located on the Boise River in southwestern Idaho, the population of Boise at the 2010 Census was 205,671, the 99th largest in the nation.

GETTING HERE OR THERE!

Getting to Boise has never been easier! The Boise Airport offers 20 nonstop destinations and numerous one-stop connections to get you where you need to go. The Boise Airport is conveniently located just four miles from downtown Boise. For more information visit: www.iflyboise.com

Before you make any travel plans, be sure to checkout these airlines that fly in and out of Boise nonstop!

Your Ultimate Guide to the Boise Area

I love living and working in Boise, Idaho. This special city has become a magnet for those ready to leave the congestion, hustle and bustle of other Western cities.